This entry was posted on 11th February 2020 by Gabriella Sandham. 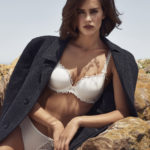 While it’s always divine to slip on some sexy and luxurious lingerie, there are times when nothing beats a T-shirt bra. Ideal for wearing under clingy garments, primarily – as the name suggests – T-shirts, the perfect example it's provides full coverage for the breasts, without seams and obvious decoration. Designed to offer practical support and coverage, simplistically a T-shirt bra gives the torso the equivalent of no VPL (visible panty line). Beyond giving a smooth contour beneath tight clothing, the T-shirt bra is also lined with foam or padding to help conceal the nipples when a slight chill may cause them to protrude through your outerwear.

The development of the modern bra reflects the change in the role of women in society. Where women previously wore a restrictive corset, the concerns of doctors about the health implications of such a constricting garment, coupled with pressure from feminist groups such as the Rational Dress Society and the National Dress Reform Association, lead to the invention of the bra in the form we recognise today. As women became more active in the workplace as well as in society, the development of a garment that properly supported the bust and allowed women to move freely was vital. The T-shirt bra is a prime example of how far we have come in terms of being free to wear and do whatever we want but was only really developed in the past decade.

We’ve come a long way since then and, at Gabriella Sandham, we stock a wide range of perfect T-shirt bras from stockists such as Prima Donna, Marie Jo, Simone Perele & More